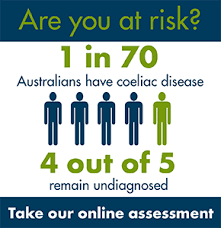 As we close off this week, we say goodbye to the end of Coeliac Awareness Week in Australia so I thought it was fitting to right a post about this misunderstood condition.

According to the Coeliac Australia website, 1 in 70 Australians have coeliac disease… but 4 out of 5 of them are walking around undiagnosed. So far in clinic just this year to date, I’ve have 7 of my clients tested privately for coeliac disease (a cost of about $60) and 6 of these have come back with positive antibodies. You could say I have a good hit rate when spotting this condition and its signs!

Coeliac Disease is an extremely serious condition and early diagnosis is ideal as it can have serious consequences if left untreated.  It is very different from gluten intolerance because it is autoimmune in nature, meaning that its a condition where the body essentially turns on itself. In the case of coeliac disease, the body begins attacking its own villi, which are tiny projections lining the small intestine allowing us to absorb nutrients from our food. When these start being destroyed, absorption is severely compromised. For this reason, early signs include a lack of energy (because fuel can’t be extracted efficiently from food), unexplained low iron levels, low B12 levels, depression and a visible lack of vitality. In some cases, bumps or rashes on the body may be present because having coeliac disease is a bit like being allergic to gluten. Gastrointestinal symptoms may range from generalized bloating, to ‘constant pins and needles’ in the gut, to full blown cramps and pain in the belly particularly after ingesting gluten. IBS like bowel motions may also be present. When its left untreated for a long time, the gut can simply become overactive to lots of different foods  because its so inflamed.

Coeliac disease can also be silent (symptomless), making it even more tricky to spot!

Long term, if left undiagnosed, we know that bone health will be affected (due to impaired nutrient absorption) and this condition has also been linked with infertility.

Coeliac disease does have a genetic component so anyone who relates to this symptom list who also has a relative with an autoimmune condition should discuss the possibility of coeliac disease with their health professional or book an appointment here.

Gluten free eating has become incredibly trendy in recent years and in part, I do believe this has contributed to less people being properly tested for coeliac disease. Firstly, some people simply remove gluten from their diet without being properly tested. I believe in the importance of diagnosis by your GP / a specialist because it generally equates for a much stricter approach to ‘gluten free’ plus you need to warn relatives as they may also need to be tested.

Secondly, i believe some people aren’t being tested because some health professionals  may be a little frustrated with everything being blamed on dairy or gluten! This is sometimes the feedback i get from clients anyway, when they have requested testing. I do think its important we ‘screen’ with lots of symptoms and test genuinely likely cases. I find it fairly easy with a few leading questions to determine if there may be a real problem with gluten or if its simply being avoided for other reasons.

Finally, we all need take ownership over our health by booking in with a health professional to thoroughly discuss any changes in symptoms as opposed to simply relying on Googling  information.

There are cases where testing for coeliac disease does come back negative but a person’s health may improve when they remain off gluten and this is typically coined as ‘non-coeliac gluten sensitivity.’

There are also cases when the dietary culprit for health problems, particularly gastrointestinal have nothing to do with gluten at all so again, its critical to seek professional health.

Gluten is not always the devil, but when it is, it can be the stuff of nightmares.

Think you may have a problem with gluten, be a coeliac or just have a really reactive gut and no idea why? Drop me a line and we can organise a time to sort it out.